-[Evo Gear "EXPS3-0" and "G33" are now available as a set! ] EXPS3-0 Holocite Replica & G33 Magnifier Replica made by Evolution Gear, which is a hot topic for its ultra-realistic appearance and high performance, is now included in the set!
-[High-class exterior material] The exterior cover is made of "super duralumin," which is also used as a material for aircraft parts. The surface is hard alumite resistant to scratches and corrosion, and you can enjoy a unique texture.
-[New lens] EXPS3 uses a reflection reduction lens with less reflection. Your face and background are less visible, supporting accurate sighting. The G33 uses as many as six small lenses, just like the real thing, and achieves a very clear and bright field of view. The size is also one size smaller than before.
-[Combination of EXPS3-0 and G33] By combining EXPS3-0 and G33, it can be used as a scope with a magnification of about 3 times. If you use G33, you can play an active part in various situations such as "evaluation of distant targets (enemy, ally, object)" and "ballistic confirmation at zero-in".
-[Switching between use and non-use of G33] The STS (Switch To Slide) mount is reproduced on the G33. You can switch between use and non-use in less than 2 seconds with a one-touch operation that you just wake up / defeat by hand. You can shoot quickly and accurately in any range, short range, medium range, long range.

"Evolution Gear EXPS 3-0 Sight", whose overwhelming realism became a big topic compared to conventional replicas
In the summer of 2020, the orthodox evolution version "2020 Ver. Evolution Gear EXPS3-0 Sight" that achieved quality that surpassed it was finally released.
It has greatly evolved from the 2019 model.

【appearance】
■ Warning label changed to the latest one
■ Add the same "hole" to the front of the battery cap
■ Hexagonal screws on the left and right of the main body ⇒ Change to Torx screws
■ Each part is engraved in a size closer to the real thing and changed to a sharp typeface
■ The surface finish of the exterior has been changed to give a finer matte texture. 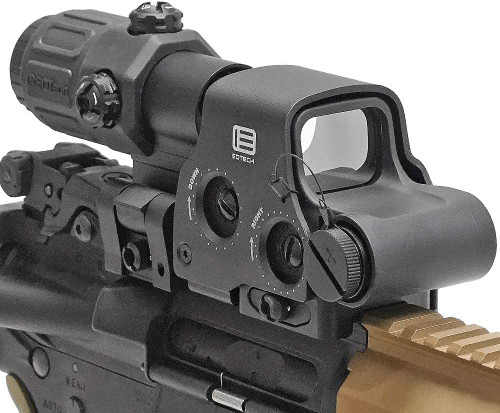